We are a diocesan Catholic high school with enrollment hovering around 900.  With a legacy of excellence that spans over 130 years, we are proud and honored to partner with our parent community and our parishes to educate and form the young people of the Catholic Diocese of Wichita on the east side of Wichita, Kansas.  Our mission at Kapaun Mt. Carmel Catholic High School is to be dedicated to the education and formation of the total person in the image of Jesus Christ.  We are mission driven.  Our philosophies, policies, prayers and curricula, are intentionally designed to support this mission.

Kapaun Mt. Carmel Catholic High School is dedicated to the education and formation of the total person in the image of Jesus Christ. 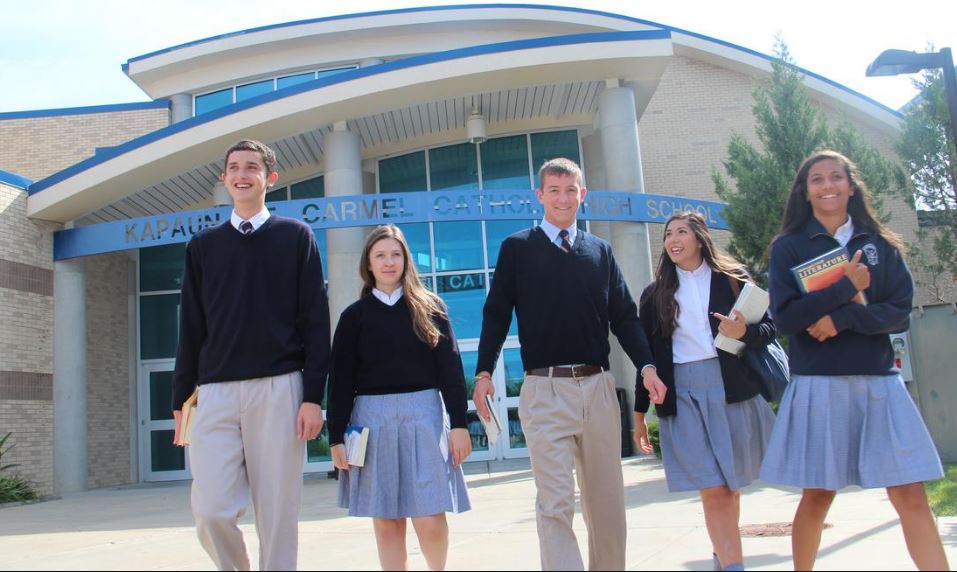 Kapaun Mt. Carmel Catholic High School has its roots in a small girls’ academy, 21 students strong, called All Hallows Academy, opened in 1886 by the Sisters of Charity of the Blessed Virgin Mary (we know them as “the BVMs”). All Hallows Academy occupied a beautiful complex of buildings built on the banks of the Arkansas River near downtown Wichita.

In 1900, Bishop John Hennesey, Bishop of Wichita, requested that the name of All Hallows Academy be changed because of the negative connotation associated with the purely secular holiday of Halloween.  The BVMs chose the name Mt. Carmel Academy, after their Mother House in Dubuque, Iowa.  Mt. Carmel Academy has existed ever since, graduating a class of seniors in every year since 1887.

In 1956, the Catholic Diocese of Wichita, in conjunction with the Jesuit order of Catholic Priests, opened an all boys school on the east side of Wichita.  This school was named after Father Emil Kapaun (pronounced "KAY pehn"), a priest of the Diocese of Wichita.  Fr. Kapaun became a chaplain of the United States Army during the second world war and again during the Korean War. In November, 1950, Fr. Kapaun, serving in the 1st Cavalry of the US Army, was captured in the Battle of Unsan, a particularly brutal battle wherein Chinese soldiers, having sneaked in to North Korea to aid their political allies, overran the tremendously outnumbered American troops.  Fr. Kapaun's stories of service, faithfulness and bravery before and during his period of captivity are well-documented.  He died in a North Korean prison camp on May 23, 1951.

Kapaun Mt. Carmel is accredited by AdvanEd, the State of Kansas and the National Catholic Education Association. Institutional membership is held in the National Association of College Admissions Counselors and many professional organizations.