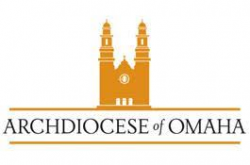 The first church in the Nebraska Territory was built by Catholics in Omaha. St. Mary’s Church, which stood on the east side of Eighth Street between Harney and Jackson streets, was dedicated in August 1856. The simply designed structure measured 24 by 40 feet. It followed, within a year, the first recorded Mass to be said in Omaha by Father William Edmonds of the Diocese of Dubuque.

Catholicism in the area, however, has longer roots, going back to 1838 and the work of Jesuit missionary Peter De Smet, who is known to have visited the site of Bellevue.

Although the territory had been under the Vicariate Apostolic of the Indian Territories since 1850, the vastness of the area under that Vicariate (700 miles north to south and 600 miles east to west) led the Jesuit Bishop of the area, John Miege, to request a division. In 1857, the Vicariate Apostolic of the Nebraska Territory was established, but no one appointed to administer it until 1859, when James O’ Gorman, a Trappist monk, became the first bishop of the area. His see was 367,265 square miles with 5,000 Catholics and three priests. On June 25, 1859, the bishop added to his clergy the first priest ordained on Nebraska soil, Father William Kelly.

The Sisters of Mercy came to the area in 1864 and the Benedictine Sisters in 1865. St. Mary Church, which became the cathedral and had its name changed to St. Philomena, was quickly outgrown and a new Gothic-style cathedral was built in 1868 at Ninth and Howard streets. By that time, four parishes were established and growing in the area — St. Mary Magdalene and St. Philomena in Omaha, St. Patrick in Fremont, and St. Patrick in Jackson. The tremendous growth in the area caused more than 70 parishes to be established before 1900.

The Diocese of Omaha, which included Nebraska and Wyoming, was created on October 2, 1885, while James O’Connor was bishop. The diocese was split on August 2, 1887, and reduced to all counties in Nebraska north of the Platte River. At that time the Dioceses of Lincoln and Cheyenne were created. The Omaha Diocese again was split in March, 1912, as the Diocese of Kearney was created. On April 11, 1917, that diocesan see was transferred to Grand Island as previously disputed counties were transferred to that western Nebraska diocese. The Omaha Diocese became an Archdiocese on October 10, 1945.

St. Cecilia Cathedral – The Mother Church for the Archdiocese of Omaha

Saint Cecilia Cathedral, the “mother church” for Catholics in northeast Nebraska, is a place of daily worship, the landmark of mid-town Omaha and a destination for thousands of people each year.

Catholic people from the 23 counties of northeast Nebraska comprising the Archdiocese of Omaha gather around their Archbishop each year for significant religious events and to celebrate the sacramental life of the Church in its fullness.

The Cathedral is also the church and home of an active urban parish. The parish grade school has a century of continuous operation. It has a proud record of student achievement and has consistently received local and national recognition for its programs and faculty. Faith in action is a standard that has guided the parish to be effective in works of mercy, in witnessing to justice and in partnerships within the ecumenical and civic community.

Email me jobs from Archdiocese of Omaha