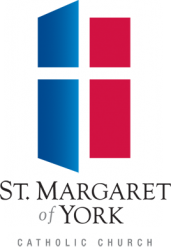 St. Margaret of York welcomes you, whether you are a visitor or a parishioner. As a Catholic parish community of faith, the Mass is central to our lives. Our Mass schedule is posted above. Feel free to come early to Mass and/or remain after Mass to spend some time with our Lord.

Once a month, "Snack Saturday" is hosted after the 4:30pm Mass and Donut Sunday is after the 9:00 and 11:00am Sunday Masses. What a great opportunity to visit with our fellow parishioners and meet new friends while enjoying snacks, coffee, donuts and fellowship.

St. Margaret Clitherow, the Pearl of York: Our Parish Namesake

Margaret Clitherow of York, England (1556-1586) was a holy woman of the Reformation Era. She was a daughter of Thomas Middleton, Sheriff of York, a wax-chandler. Margaret Middleton married John Clitherow, a wealthy butcher and a chamberlain of the city, in St. Martin's church, Coney St., and lived in the Shambles, a street still unaltered today.

Converted to the Faith about three years after her marriage, she became most fervent. Amid persecution of Catholics, Margaret arranged Masses, hid priests, and kept the faith alive in her community. She was a devoted wife and mother and strongly desired her children to retain their Catholic faith.

Arrested and imprisoned, she refused a trial by jury because she knew her own children would be used to testify against her. St. Margaret was condemned to the 'pein forte et dure' i.e. to be pressed to death. She was martyred by being crushed beneath a door weighted with rocks while a sharp stone was beneath her back, her hands stretched out in the form of a cross and bound to two posts.

Her last words during an agony of fifteen minutes, were "Jesu! Jesu! Jesu! have mercy on me!" Her right hand is preserved at St. Mary's Convent, York, but the resting-place of her sacred body is not known. Her sons Henry and William became priests, and her daughter Anne became a nun at St. Ursula's, Louvain.

Email me jobs from St. Margaret of York Parish